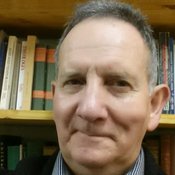 Dr. Christo Lombard started his career as a Philosophy tutor at Stellenbosch, taught one year Biblical Instruction at a high school in Windhoek, and then taught Biblical Studies and Ethics at the University of the Western Cape. He served in a Mission Congregation in Namibia for twenty years, while also pioneering the first Department of Religion and Theology there. He also served as the Director of the Ecumenical Institute for Namibia for 10 years. He served as Professor of Theology and Ethics and Desmond Tutu Chair at the University of Western Cape in Cape Town, South Africa. During his career he has studied, taught or visited on academic visits to Utrecht and Amsterdam (Netherlands), Basel (Switzerland), Hamburg, Heidelberg and Tübingen (Germany), Lund, Dalarna and Uppsala (Sweden), Seoul (South Korea), Oslo (Norway), Copenhagen (Denmark), Helsinki (Finland), Jerusalem (Israel), Rome (Italy), Madrid (Spain), Warwick, London, Edinburgh, Birmingham, Chester (UK), Poughkeepsie, New York, Berkeley, Princeton and AAR meetings at various places in the USA, Nairobi (Kenya), Gaberone (Bostwana) and various places in South Africa. He participated in the struggle against apartheid (against the stream of racism amongst his own people), in the non-violent side of the struggle for Namibian liberation during a 23 year war (which included talks with the liberation movement leaders of SWAPO), and in a Namibian movement for reconciliation and peace, the Breaking the Wall of Silence movement (protesting SWAPO’s unwillingness to admit human rights abuses in their own ranks), and more recently the support for a movement against violence towards women and children (in South Africa).